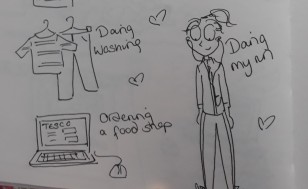 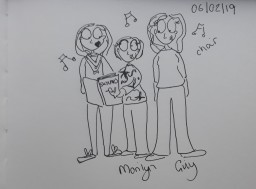 So the past week or so I’ve been getting increasingly frustrated with myself for just feeling ‘a bit off’. It’s not a full blown episode but I jut feel a bit out of sorts and it’s reminded me that in between episodes there’s always a little wiggle room to feel a bit strange without committing to something hard-core like a bit of mania. This has involved some low key things like racing thoughts, a sense of feeling uncomfortable in my skin and struggling to focus and then some slightly more unusual sensations like hearing a few voices and in a couple of fleeting thoughts of self harm. The self harm thing is odd seeing as it’s been a very long time since I did that and it tends to be during an episode, often a manic one (curve ball) where I find the sensation grounding when I’m feeling out of control. I’m certainly not recommending you cut your skin to feel calm because things like lavender sprays, ASMR videos, baths and walks are all much more in the vibe of ‘self-care’ that us millenials are snowflaking it up for and are a much healthier approach. I’ve therefore had to reflect on what these thoughts are attempting to address and I think It’s simply my body reverting to old habits; I’m like ‘Hey I don’t feel great body’  and my body is manically shouting back at me ‘just self harm, that worked in the past right?!’. As a reminder that did not work in the past, it simply left me with some odd scars and self loathing. What self harm does do however is calm racing thoughts so I’ve had to pull out some more healthy tools to deal with this.

One of these tools is distraction and this currently takes the form of ‘The Great British Interior Design Challenge’ if I am at home (If you haven’t watched it already it’s on Netflix and you must) and ASMR if I am out the house. ASMR is really a whole other blog post but is essentially like a more complex form of the white noise machines you get where you listen to rainforest sounds and all of a sudden there’s a frog and you’re like ‘where did that frog come from?’. It’s basically calming sounds someone makes with odd things like paper and crinkly raincoats and because someone is making them rather than them being on a loop there is enough variation that I’m focused on the sounds but also able to pass out asleep to them at bedtime. It’s a handy tool for when I’m out the house and particularly if I want to just look like i’m listening to music such as in the Cafe at my workplace.

The second is being super mindful about overstimulation, I tend to find when I feel like this that I feel easily overwhelmed by things around me. Right now it’s not enough that I need to check out of all social situations but it’s enough that each day I’m judging where I’m at and what I’m doing the following day. For example today I have a longer day at work and am attending a social event in the evening so I did literally nothing last night except make some chilli. It means that I feel fairly fresh to socialise today. When people say overstimulation lots of people things of loud noises or lots of lights but it can be as simple as lots of phones ringing or being around people constantly, even if it’s not noisy. Taking time out allows me to stagger interactions so they feel more manageable and this is really important in a people-facing job.

An inability to focus is tricky seeing as at work I’m managing multiple things every day so I am up to my eyeballs in lists. I have a notepad broken down into subsections (mmmm nerdy goodness) and then a ‘today’ pad, so i can remind myself that I.must.get.this.done! Normally I am better at prioritising workloads but right now I am making sure that I complete a task as I go to ensure it gets done and not lost into the ether of my brain and my drawer. This lack of focus is tied in with racing thoughts which are sometime productive because they force me into being a little supersonic hedgehog and other times I just go into mental overload and have a meltdown.

Hearing voices has been enough that it’s thrown me when I’m around others, particularly as they have largely been derogatory, but not enough that I’ve been worried. I spent a rather interesting day in London a week or so back where there was constant chatter in my head and also in the actual world and I sort of just followed my friend from shop to shop like a mute puppy in an attempt to maintain calm. This week they’re off though which is good because that’s one less thing to worry about.

In ‘Crazy Ex Girlfriend’ the main character talks about becoming unwell with her BPD because she didn’t keep ‘doing the work’ around her mental health and I can see that I have recently fallen into that trap. I haven’t been making sleep a priority, I’ve sort of just accepted not sleeping and I haven’t been having huge amounts of down time. Both best friends have recently been unavailable (for good reasons like being in awesome holiday destinations) but it means I haven’t had an outlet or check in point with people who know me well enough to have a good grasp on supporting me feeling this. I’m also in a semi new relationship where I’m hyper aware going a bit off grid would not be ideal and whilst I know rationally if he can’t stand the heat he should get out the kitchen (said with all kinds of sass and finger wagging) I also know that’s not how it works if you like someone. The result is that I’m scrambling to get my shit together so that I don’t fall apart, which I guess is a motivation but also feels like a bit of pressure too. Finally job stuff is going well and I’ve possibly got some cool shuffle rounds happening in my department so I’d quite like to be on my game to encourage that change rather than be like ‘awesome thanks for the opportunity but I also need to work from home every day this week now’. So basically there’s a fair bit of pressure to stay on top of things when normally I’m like ‘cool I’ll just hang in my PJs and take sleeping tablets every night and ride it out.’

It’s been a stark reminder that although things have been going really well it’s easy to slip up if you stubbornly refuse to notice the smaller things and it’s also ok to do the work and be a bit weird if you need to. I am therefore choosing to be a bit weird for a minute to stay well and not go hard-core weird for the long term. This is healthy decision making.