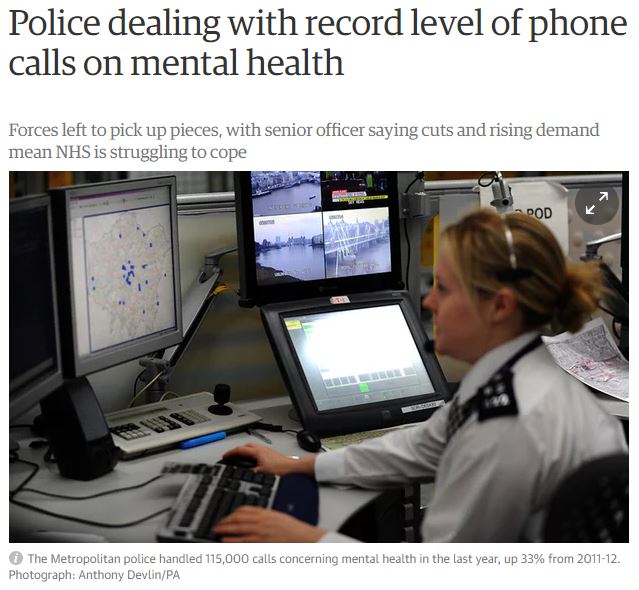 I really feel for the Police, a few weeks back i talked someone off a train track, she told me she didn’t want to die but needed help and it wasn’t being offered, she wanted a short stay in Hospital to keep her safe whilst she got through a low but she was being turned away on the grounds that she was becoming over reliant on services. People we should live in a world where if someone says they are not safe they can access fricken services! When the Police arrived they told me they had collected this lady from a bridge that morning and taken her to Hospital where she had been placed under a section and discharged later that day. There’s a dark joke amongst the mental health community that the only way to get into a Hospital is to say you don’t want to go in and believe me it’s a well known joke for a reason. Once i’d chatted to the lady and she’d calmed down i asked the Police what we could do, they told me the only thing they could do was to take her back to the general Hospital to be readmitted, reassessed and then hope it was decided she should be sent back to the mental health Hospital. Not only an enormous waste of resources but a huge stress on someone who was already distressed. The Police felt helpless, they didn’t have the authority to make the call she needed, all they could do was pick up the pieces. One policeman was great with the woman and really relaxed her but the other kept pushing her to take her medication when she told them she hadn’t taken it that day, she wasn’t listening to the fact that she took her medication at night and it was only 5pm. It must be so difficult without in-depth mental health training to know how to handle these situations, particularly when your say is irrelevant in the end result. Because of huge cuts to services it’s now harder than ever to access the support you need and people have to push to greater lengths to be heard, either by committing crimes or risking their lives. The statistics in this article are pretty shocking and it’s definitely worth a read to understand the impact the cuts are having on the Police force.